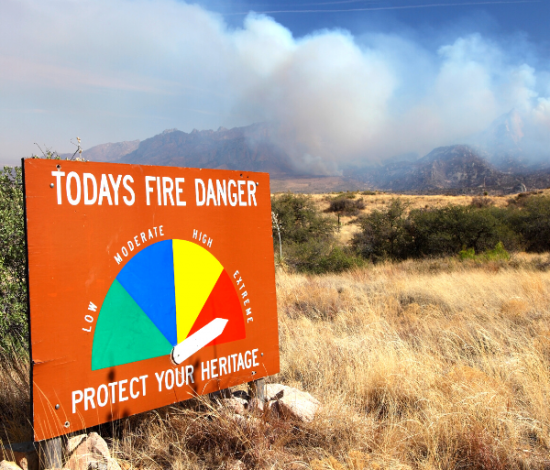 From June 2–11, 2022, the Oregon Values and Beliefs Center conducted a statewide survey of Oregonians’ values and beliefs, including attitudes and perceptions about wildfires in Oregon. The question numbers in this document correspond with the survey questionnaire (Q1-9).

Oregonians Agree: Wildfire is a Concern

As Oregonians often struggle to bridge ideological divides, there is widespread common ground when it comes to concerns about the effects of wildfire in Oregon, regardless of political party, income, education, or age.

The majority of Oregonians expect wildfires to increase over the next 10 years (88% of respondents) (Q3A).

Oregonians with and without school-aged children are also in agreement (88%, 87%).

“Wildfires have been crazy the past few years and it scares me.”

People are More Concerned About the Threat to Other People Living in Oregon, Than Their Own Personal Risk

Oregonians are most concerned about the risk wildfires pose to people living in Oregon in general, with nine in ten Oregonians saying they see wildfires as a serious threat (92%) (Q1C).

Comparatively, only six in ten Oregonians see wildfire as a very or somewhat serious threat to their local community (60%) (Q1B). five in ten of those polled see wildfires as a direct threat to themselves and their families (53%) (Q1A).

Oregonians are less likely to see wildfire as a direct threat to themselves or their family, although more than half say this is a very or somewhat serious threat (53%) (Q1A).

High Level of Concern is Similar to Last Year

The high level of concern for the risk of wildfires in Oregon, broadly, did not budge over the past year, with 92% of Oregonians in May of 2021[1] and 93% in June of 2022 seeing wildfires as a threat to people living in the state.

Considering the extremely wet spring, it is not a major surprise that when asked about their area of Oregon, Oregonians’ concern for wildfire has decreased a bit since May of last year.

In addition to wildfires, 79% of Oregonians also believe that, over the next ten years, there will be a significant loss to the states forests because of heat and drought (Q3C). Women predict loss of forests from drought and heat at a higher rate than men (85% compared to 72%).

Risks to Health and Wildlife are Major Concern

When presented with a list of potential negative impacts from wildfire, Oregonians’ values appear to align mostly in maintaining our natural resources, health, and wellbeing, with less concern about impacts to recreation or personal property (Q7A-H).Oregonians are most concerned about the health effects of smoke from wildfires (83% of respondents) (Q7E).

When it comes to concerns about smoke, there is no noteworthy difference between those who have school-aged children in their household and those who do not (85%, 83%). Although both women and men are greatly concerned about the health effects of smoke, women are slightly more so (88% compared to 79%).

Loss of wildlife and fish habitat is the possible effect with the second-highest level of concern, with a striking 82% of Oregonians indicating great or moderate concern (Q7C). All Oregonians within the various age groups, political affiliations, counties, education levels, incomes, housing situations, and genders range between 74% and 88% in saying they are concerned about loss of wildlife and fish habitat from wildfires.

Loss of Public Forestland is Also a Top Concern

Oregonians share a similar level of concern about uncontrolled and high-severity wildfires and loss of public forestland as a result of wildfires (80% and 78%) (Q7D,Q7F).

Concern about uncontrolled and high-severity wildfires remains relatively stable regardless of identity or area of residence, but women are slightly more concerned than men about the loss of public forestland (81% compared to 74%).

Slightly more than six in ten Oregonians worry about lost or diminished recreational opportunities and the cost of firefighting that might result from wildfires (65% and 63%) (Q7B,Q7G).

The lowest levels of concern were for damage to personal property (51%), and reductions in tourism (49%) (Q7A,Q7H).

“Controlled burns and allowing natural caused fires to burn is essential, just because humans are encroaching on nature doesn’t mean people should risk life and limb to protect material possession.”

A strong majority of Oregonians (75%) believe that attempts should be made to fight wildfires that break out in wilderness areas far from homes (Q4).

Oregonians are in support of fighting the fire particularly if it is human-caused:

“We can’t just let our state burn to the ground.”

“Every bit of damage we are responsible for and should intervene. We constantly hurt the forest, so letting nature do its thing is not an option.”

“I would say if it’s naturally caused and far from homes then let it burn, but only up to a limit, control it and make sure it doesn’t destroy too much land area. And if it’s human causes, fight it.”

Should Some Wildfires be Left to Burn?

Those Oregonians who believe some wildfires should be left to burn, while in the minority, express a belief that not all fires are bad for the ecosystem. They also say they fear finite resources being used unnecessarily:

“As long as no homes/businesses are affected, then let nature take its course. Fires are good/healthy for forests, so we should let it happen. Also, it would help thin out the forests so that a massive wildfire can be avoided in future years, at least for a while.”

“Fire is a natural part of the ecosystem. it clears out undergrowth that fuels future fires. it gets rid of dead, diseased trees. Everything I’ve read suggests that it is a waste of resources and the result of poor management to continue throwing resources–especially manpower–to fight fires that don’t respond very well to the efforts to control.”

“Resources and personnel are finite and cannot be everywhere, so they must be focused where they matter.”

Less than half of Oregonians approve of how wildfires are being managed, either by individual landowners or the government. However, approval numbers for private land management are higher than those of the state or federal government.

“Timber companies do not want to log weak, sick, damaged trees in dense forest. Timber companies do not want to log trees killed by fire. They want access to log the large, old healthy trees that survived fire and density. There is no profit for them in small, destroyed trees. A trees ability to survive (or come back) from a fire is greatly underestimated in the logging debate.”

Man, age 65-74, Multnomah County, White and Other race or ethnicity

Evacuations due to Wildfire

Among those who have not had to evacuate because of wildfires, 53% of women say they feel they have the support and resources they need to suddenly evacuate their homes vs. 70% of men who say the same thing (Q6B).

Although not statistically significant, among Oregonians who have had to evacuate because of wildfires, once again, women were less likely than men to say they got the support they needed (57% compared to 66%) (Q6A).

While there appears to be a consensus amongst Oregonians that wildfires are a serious issue, those in rural areas are more likely to see wildfires as a direct threat to themselves and their families (Q1A).

67% of Oregonians in rural counties are concerned about the threat of wildfires to themselves and their families compared to 45% of those in urban areas (Q1A).

Part of this may be due to more personal experiences with wildfires, with 27% of Oregonians in rural communities saying they have already had to evacuate their homes due to a wildfire compared to 16% of those living in urban areas (Q6).

“Living in rural Oregon near forests, there is now constant fear of another wildfire. There is also the seemingly constant amount of smoke in the air now, all the time; it is ridiculous.”

While BIPOC and white Oregonians have similar feelings about wildfire, it is worth noting that among those who have not had to evacuate, 56% of BIPOC respondents say they feel they have the support and resources they need to evacuate their homes, compared to 64% of white respondents (Q6B).

Just 32% of those 75 or older feel that wildfires are a risk to themselves and their family, compared to 49-58% of the other age groups (Q1A).

When asked about the risk of wildfires to folks living in their community, once again, older Oregonians reported concern at a lower rate (42% compared to 56-66% of other age groups) (Q1B).

Of those 18-29, nearly seven in ten believe wildfire is a serious threat to people living in their community (66%), the highest level of concern among all age groups.

When it comes to concerns around wildfire to Oregon in general, there is much more alignment among Oregonians of all ages that it is a serious threat (88-96%) (Q1C).

There is agreement among all age groups that Oregon will likely experience an increase in the number of wildfires over the next ten years (83-92%) (Q3A).

Methodology: The online survey consisted of 1,446 Oregon residents ages 18+ and took approximately 15 minutes to complete. Respondents were contacted by using professionally maintained online panels. In gathering responses, a variety of quality control measures were employed, including questionnaire pre-testing, validation, and real-time monitoring of responses. To ensure a representative sample, demographic quotas were set, and data weighted by area of the state, gender, age, and education.

Statement of Limitations: Based on a 95% confidence interval, this survey’s margin of error for the full sample ±2.5%. Due to rounding or multiple answer questions, response percentages may not add up to 100%.