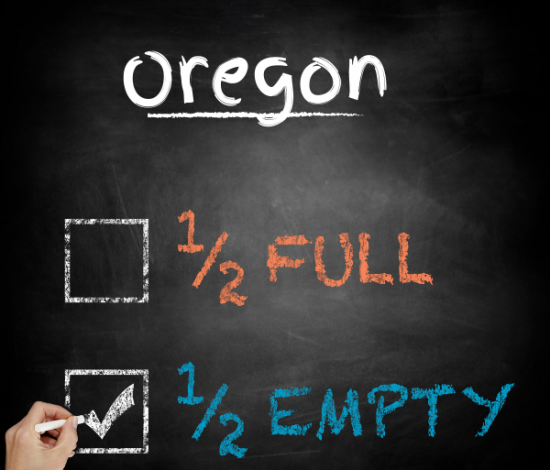 From January 13-20, 2022, the Oregon Values and Beliefs Center conducted a statewide survey of Oregonians’ values and beliefs, including questions about the state’s direction and their mental wellbeing. We’d like to acknowledge and thank DHM Research for providing us baseline questions benchmarked to determine changes in attitudes over time.  The question numbers in this document correspond with the survey questionnaire (Q1-12).

When it comes to the overall economic conditions in the state, most Oregonians rate conditions as “only fair” (40%), while 33% say conditions are poor or very poor and 24% say they are good or excellent (Q10).

Lack of Optimism for Improving Conditions

The majority of Oregonians are worried about their personal financial situation (59% very/somewhat worried) (Q12).

Respondents were asked how often during the previous two weeks they had been bothered by various feelings: Not at all, several days, more than half the days, and nearly every day. With only two exceptions, a majority of Oregonians report they have been bothered by each of the experience categories at least several days over the previous two weeks, if not more. When looking at those who report being bothered by these feelings several days or more, four tiers emerge. In nearly every case, those with lower annual incomes, lower levels of formal education, women, and Oregonians with school-aged children are more likely to experience each of these feelings (Q1-7).

Tier 1: Worrying Too Much About Different Things

The first tier consists of the most common feelings Oregonians report being bothered by: worrying too much about different things (69%) (Q3).

Tier 2: Experienced by About Two Out of Three Oregonians

The second tier consists of feelings that around 2 in 3 Oregonians say bother them several days or more: feeling nervous, anxious, or on edge (66%); becoming easily annoyed or irritable (66%); and having trouble relaxing (64%) (Q1,Q6,Q4).

Tier 3: Not Being Able to Control or Stop Worrying

In the third tear is the only category experienced by a majority of Oregonians, but fewer than 60%: Not being able to control or stop worrying (54%) (Q2).

Tier 4: Experienced by Fewer Than 50% of Oregonians

The final tier consists of the only two categories the majority of Oregonians experience fewer than several days: being so restless it is hard to sit still, and feeling afraid, as if something awful might happen (46%, each) (Q5,Q7).