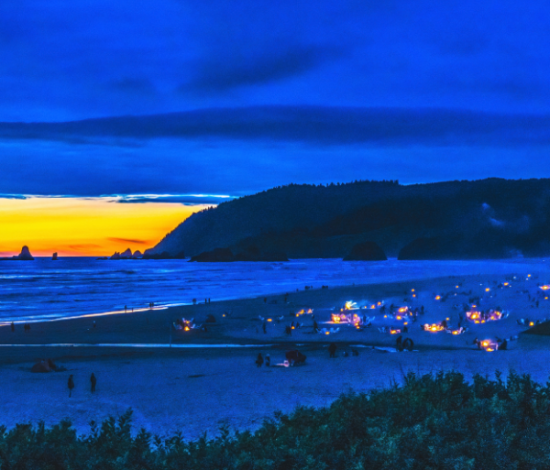 From May 4th through 10th, 2021, the Oregon Values and Beliefs Center conducted a statewide survey of Oregonians’ values and beliefs, including their thoughts about tourism and its impact on Oregon communities. This online survey consisted of 918 Oregon residents ages 18+ and took approximately 15 minutes to complete. Responses were analyzed and categorized to allow for a better understanding of trends in Oregonians’ values and beliefs. The survey’s margin of error, for the full sample, ranges from ±1.9% to ±3.2% depending on how the response category percentages split for any given question. Findings will include a citation of the relevant question, which can be referenced in the annotated questionnaire and tabs at the bottom of the page.

A pro and a con together. It gives our state income for small businesses, but it is annoying to deal with the added crowds during the summer.

I think tourism has positives and negatives to it. I think a positive side of it is helping local businesses stay open. A negative side would be sometimes tourist do not respect our land here or may be unaware of certain precautions in areas.

I think tourism can help drive an economy if it is managed well. I am proud of my state and I want others to experience its beauty too. We have many things to see here, and I want a diversity of people visiting and living here.

Tourism in Oregon This Year

Why Oregonians Feel Positively or Negatively About Tourism in Their Communities

We need a boost in the economy, especially if we want to bring the country back to where it needs to be.

It is a beautiful place, why not share it, plus they bring in much needed money.

I think travel in general is good. We shouldn’t limit who is allowed to visit and see what Oregon has to offer.

People from Oregon will respect it more.

Because they cause problems when they come to my small town, leaving their garbage all over the beach, and don’t appreciate the town or it’s people. They think because they come from another town they can take advantage of us, which they do, even though they are spending money. They don’t care how dirty they leave the town.

Because they are bringing sickness and are not wearing masks or taking precautions.

Tourists bring too much traffic and then they return and buy property creating more problems.