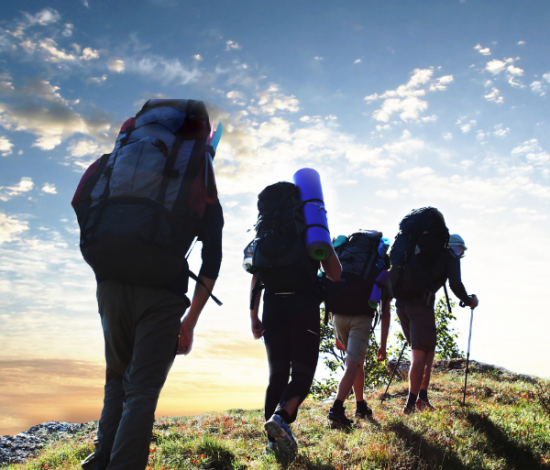 From May 6–16, 2022, the Oregon Values and Beliefs Center conducted a statewide survey of Oregonians’ attitudes toward tourism. The question numbers in this document correspond with the survey questionnaire (Q21–Q28B).

When Oregonians think of tourism, images of the state’s natural beauty are top of mind. Two-thirds of residents believe scenic destinations are the top draw for tourists (65%) (Q23).

After natural beauty, residents say that restaurants, breweries, and shopping are the second-largest draw (37%) (Q23). For this category, residents point to urban attractions—including urban greenspaces—such as restaurants and food carts in downtown Portland, people visiting for an event at the Oregon Convention Center, the Portland Japanese Garden, and the International Rose Test Garden (Q21).

“Being able to go from coastal beaches to snow-capped mountains to expansive forests to flat desert, all within a few hours of each other in the same state.”

“Eating at all the different food carts in Portland, going downtown and checking out the Rose Garden, Shanghai tunnels, etc.”

Not all residents are thrilled with tourism in Oregon, which can make it more difficult for in-state residents to hike, bike, fish, camp, and enjoy the state’s natural resources (Q21).

“Crater lake and all the other wilderness areas that get trashed or overcrowded by out of state visitors each summer.”

Some residents in the Portland region are embarrassed tourists will see a visible and significant homeless crisis, alongside lots of illegally dumped trash (Q21).

“Portland used to be attractive for tourists. Now I feel it’s best to avoid the city and focus on the excursions into nature instead. The homeless crisis and overall decay evident in the city is embarrassing.”

The Positives and Negatives of Tourism

These results are similar to 20211, when 63% of Oregonians said tourism contributed to traffic congestion.  While many residents do believe that tourism can drive up rents and exacerbate homelessness, these views are less common. About half say tourism has some or a lot of impact on Oregon’s lack of affordable housing (45%), while about one-third say tourism impacts the homelessness crisis (34%) (Q22c, Q22e).

Oregonians also recognize the benefits that tourism brings to the state, especially when it comes to a strong economy (Q22b).  Two-thirds of Oregonians say tourism contributes to a strong economy (67%). This result is unchanged from 2021 (68%).  Fewer believe tourism contributes to funding for public services (51%), a high quality of life for residents (48%), or well-paying jobs (48%) (Q22d, Q22f, Q22g).

A scant 50% of Oregonians support charging tourists an extra fee during peak times, with revenues invested back into the community. Support is not strong (Q24).  While many residents complained about tourists in their open-ended remarks, most recognized the benefits they bring to the state as well. That could explain why a plurality of residents say they lean toward supporting the idea of a fee (31%), and one in five say they squarely support one (19%).

What Covid Precautions Do Oregonians Want in Place this Summer?

For indoor events this summer, residents in Oregon are nearly split as to whether masks or vaccinations should be required, or whether no COVID precautions are necessary. No single approach is supported by a majority of residents.

While 40% of Oregonians say masks should be required for indoor events this tourist season, nearly as many (35%) say no precautions at all are needed. Some feel that proof of vaccination is the better requirement (37%) (people could choose several answers). (Q25).

Most Oregonians don’t see a need for COVID precautions at events taking place outdoors this summer (57%).  When it comes to outdoor events, those who feel precautions are warranted are most likely to support a requirement for proof of vaccination (23%). (Q25)

Oregonians are Excited About a Lively Summer

Oregonians generally believe increased tourism this summer will be a good thing for local communities (71%). They are eager to pump more dollars into businesses and to enjoy activities that have been cancelled previously due to COVID (Q26–Q27a).  Eight in ten Oregonians say tourism in their area will pick back up this year (82%) (Q26). (This is a big jump from 2021, when Oregonians demonstrated they were not sure how travel choices would impact their local communities, with only 41% predicting tourism would pick up that year with more people choosing to stay in Oregon for vacation.)

Of those folks, 71% say they feel positively about more people visiting their community (as compared to 75% in 2021). They say that visitors will generate more income for local businesses and may even create more jobs. People are also hungry for a sense of normalcy and a way to connect as a community (Q27, Q27a).

“A lot of the wineries, breweries, shops, etc. are locally/family owned, so the more tourists we get, the more money they make. Traffic flow and construction will contribute to a lot of headaches this summer, though.”

Not all residents are thrilled about more visitors as some feel they already bear the brunt of overcrowding and tourism to out-of-town home buyers who drive up prices (Q28b).

“We are having to pay increased property taxes to maintain and increase infrastructure. Out of town residents are buying second homes here and increasing prices so they can visit and recreate. Tourism creates lower-paying jobs and isn’t as stimulating to the economy.”

“The people with money who own all the vacation rentals don’t care about the community. It’s a horrible place to try and survive. The jobs pay minimum wage barely.”

Does Tourism Create a Strong Economy?

Older Oregonians are more likely to draw a connection between tourism in the state and a strong economy (Q22b).  More than eight in ten residents over the age of 75 in Oregon say that tourism contributes some or a lot to a strong economy (82%). That figure falls steadily across age groups, down to 58% for people 18–29. Those under 45 are more likely to be unsure (13–14%).

Oregonians under 30 are the group most likely to say that tourism contributes to the state’s lack of affordable housing (56%) (Q22c).

Half or fewer residents in other age groups believe that tourism a contributing factor to the housing crisis (34–50%) (Q22c).  Residents under 30 are also more likely to link tourism to homelessness with 46% in agreement on this, and belief diminishing with age down to 21% of those 65 or older (Q22e).

Should Tourism Fees be Implemented?

Nearly one-third of Oregonians say legalized marijuana is the top tourist draw (29%) (Q23). Oregonians under 30 are most likely say this is true (44%, and reducing with age to 15% for those 75 or older).

Oregonians under 45 are the most likely demographic group to support a fee on tourists to support community investment (Q24).

Between 54% and 55% of Oregonians under the age of 45 support a tourist fee for peak times, while 42% and 50% of older Oregonians would support such a fee.

Vaccine Requirements for Indoors and Outdoors

As tourists flock to Oregon for the summer, vaccination requirements and masks are most preferred by urban residents—although a majority of residents say no precautions are needed outdoors (Q25).

BIPOC residents are generally more supportive of precautions for outdoor events than white residents, but those differences dissipate for indoor events (Q25).

However, for indoor events, the only significant difference between BIPOC and white Oregonians is support for a negative COVID test (21% BIPOC to 16% white).

Nearly half of Oregonians 75 and older—among those most at risk for serious illness—say masks should be required at indoor events this summer (49% to 35–44% for other age groups).

There are few differences by age group for a vaccination requirement (32–42%), but people 75 and older are more likely to prefer booster requirements (26% to 15–22% for other age groups).

Feelings that an influx in tourism this summer will be a good thing for the community are higher among older Oregonians (Q27).

Most people think that more tourism this summer will be positive, and those figures rise with age from 60% for people under 30 to 84% for people 75 and older.

Methodology: The online survey consisted of 1,674 Oregon residents ages 18+ and took approximately 15 minutes to complete. Respondents were contacted by using professionally maintained online panels. In gathering responses, a variety of quality control measures were employed, including questionnaire pre-testing, validation, and real-time monitoring of responses. To ensure a representative sample, demographic quotas were set, and data weighted by area of the state, gender, age, and education.

Statement of Limitations: Based on a 95% confidence interval, this survey’s margin of error for the full sample is ±2.4%. Due to rounding or multiple answer questions, response percentages may not add up to 100%.