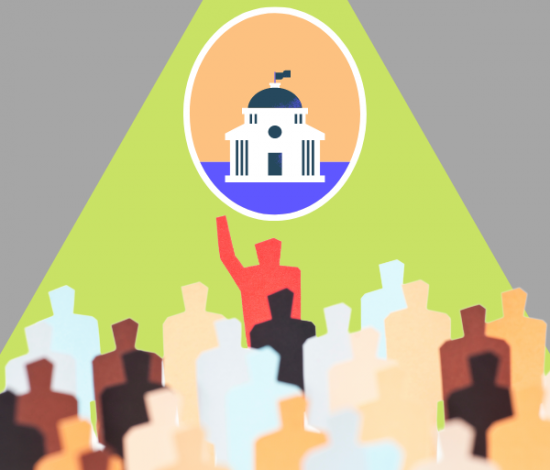 From April 8-14, 2022, the Oregon Values and Beliefs Center conducted a public opinion research project to determine how Oregonians feel about social and political change in their area of the state, including their own personal involvement and feelings of self-efficacy. The question numbers in this document correspond with the survey questionnaire (Q1-Q17).

The Demographic Trends section near the end of the report contains reporting on statistically significant subgroup differences between BIPOC and white Oregonians, urban and rural Oregonians, and age groups.  Many of these differences are not major and are presented to inform public education and communications initiatives.

Oregonians’ Concerns About Their Area

Overall, the majority of Oregonians (74% of all respondents) are either somewhat or very concerned about the future of their area of the state (Q1). Nearly one in three Oregonians say they are very worried (30%), while only 7% say they are not at all worried.

Only 7% of Oregonians think the area they live in is thriving. The remainder are split, with 32% saying they think their area is doing well enough; 33% say their area is struggling; and 25% say it depends on who you are (Q3).

Homelessness is the issue Oregonians say is most important for elected leaders to do something about, by a wide margin (Q2).

“The rising homelessness and the vacancy of jobs will eventually create a vacuum of consumers unable to be served by employers.”

“The lack of affordable housing dovetails with the homeless camps and the drug addiction intersects with the lack of law enforcement and police staffing, which in turn overlaps with the economy and societal decay. All of these issues continue because they are systemic and overlap, so efforts to tackle one fail if the others are not addressed as well.”

“I see homeless camps everywhere, including random people just camping out on sidewalks. Nothing seems to be making it better, only worse.”

“Affordable housing is hard to come by and food and health care prices are very high.”

“I am worried about the future of my area because of how quickly the green is disappearing.”

“Few people in my region know who’s in their local office or committees. The lack of agency most civilians have in their local schools and general decisions made by the county is alarming. The immigration influx is also alarming as it does not meet supply and demand. Housing and jobs are few and far between for locals.”

“Large wildfires have ravaged the area and threatened our community several times in the last few years.”

“We are politically a very polarized state. Very liberal around the major cities and very, very conservative in the rural areas. We saw this in 2020 and it led to loss of life.”

How Oregonians See Themselves Within Civic Culture

Among a series of statements (Q5a-e) about their feelings of self-efficacy related to social and political issues, Oregonians are most likely to agree with the statement “I see myself as someone who can speak out for themselves and others” (73%) (Q5e).

Among a series of statements about their engagement on social and political issues, Oregonians are most likely to agree with the statement that they “have the tools to seek out information in order to develop an informed position on a social or political issue” (73%) (Q4b).

Oregonians in Their Own Words: Prioritizing Involvement

A slim majority of Oregonians (51%) view social and political change in their area of Oregon as either their top priority or pretty important to them (Q7). 43% say they think about it sometimes, or that it’s not really on their mind.

“Social and political changes are necessary to ensure we have a future.”

“Democrat or Republican, I don’t care. We need somebody who will actually fix the issues that we’ve been given.”

“Society needs to change, but I do not have the ability to change it. I support the one who does.”

“The social and political climates have become so volatile that regular people like me, those that just want to live in peace, don’t know what to do anymore.”

“It’s important, but I don’t foresee much change.”

Participation in Specific Types of Involvement

When it comes to civic engagement in Oregon, people are most likely to have shared their opinions with policymakers, helped educate the public about an issue, or attended a protest (Q10a-g).

Where Oregonians Would go to Build Civic Leadership Skills

More than one in four Oregonians are confident they know where to turn to get the skills and resources they need to get politically involved (28%) (Q14). Many of these residents would reach out to a party or nonpartisan issue group for more information about getting involved or to take training (Q14a, open response question).

One in five residents are open to receiving information from organizations about training opportunities and ways to educate others (21%) (Q16).

Oregonians in Their Own Words: Knowledge and Skills They Would Share with Others

Oregonians were asked if there were any topics or skills they might like to help other Oregonians learn about (Q15). The knowledge and skills Oregonians would like to share with others touch on the same issues that are most important to Oregonians broadly: homelessness; climate change and the environment; and education:

“I wish I could help with the fear and hate that grows between conflicting views.”

“We need to help others. Even when we think we can’t, we can. We are the change of the future. If we don’t speak up, we won’t change anything.”

“Living to save our planet. As well as going back to the basics.”

“I would like to make the opportunity to teach how to debate in a calm and kind way.”

“Can you teach empathy and critical thinking skills? Teach others grace and tolerance? Not just PC lip service? Maybe I am just too old.”

“It wouldn’t hurt if others learn how to think rationally and be willing to listen to opposing views.”

“Our metro area is too idealistic and politically correct – and too negative toward listening and working with alternate points of view. Practical solutions are getting pushed to the side more and more.”

Oregonians in Their Own Words: What Keeps Them from Getting Involved

Of those who say they wish they could spend more time on social and political change-related activities, 46% say they are too busy, 30% say they don’t know where to start, and 23% say they can’t for another reason (Q11a).

“Would love it if there was more outreach for people to get involved in small, but meaningful ways that don’t take a lot of time.”

“Being a single father doesn’t afford me much time for anything, especially when 90% of my income goes towards rent.”

“I am a homemaker with two special needs children, and it pretty much takes all my time and energy.”

“I live in a rural area and live on a small social security income. It is expensive for me to attend events and activities in town, but Zoom is a blessing.”

“I am disabled and chronically ill. Not only do these issues make my participation unreliable, but events are NOT ACCESSIBLE. It is appalling how many people still don’t include disabled people in their diversity and inclusion policies and procedures.”

“It’s more important to try and line me up to lose my vehicle/shelter by making a new city ordinance that an expired plate means an inoperable vehicle and is subject to being towed immediately, than it is to listen to what (someone) like me has to say.”

“My career in healthcare and my job are overwhelming me, so I have little time and energy to devote to social or political change. However, it does consume a great deal of my time not spent at work or dealing with work issues.”

What If: The Issues They Would Work On, Given More Times and Resources

Given more time and resources to devote to a political or social issue in Oregon, one in three residents answered in an open-ended question that they would choose to work on Oregon’ s homelessness and affordable housing crises (34%) (Q12).

Residents named a variety of other issues or causes they would support with additional time and resources. These issues fall into five broad categories (Q12).

In terms of change-making activities, Oregon residents are most likely to express interest in creating community coalitions; organizing for local issues or long-term movements; or developing public policies

Differences Between Black, Indigenous, and Other Oregonians of Color and White Oregonians

Differences Between Residents of Rural and Urban Areas

Time is One of the Most Important Factors for Participation

Methodology: The online survey consisted of 1,581 Oregon residents ages 18+ and took approximately 15 minutes to complete. Respondents were contacted by using professionally maintained online panels. In gathering responses, a variety of quality control measures were employed, including questionnaire pre-testing, validation, and real-time monitoring of responses. To ensure a representative sample, demographic quotas were set, and data weighted by area of the state, gender, age, and education.

Statement of Limitations: Based on a 95% confidence interval, this survey’s margin of error is ±2.5%. Due to rounding, numbers may not add up to 100%. There are approximately 2,500,000 Oregonians aged 18+ meaning that for the survey, every 1% is the equivalent of approximately 25,000 residents.

As noted above, this survey uses aggregated data to analyze the opinions of BIPOC residents in comparison to the opinions of residents who identify as white and not another race. BIPOC residents are not a monolith; the grouping represents a wide diversity of races and ethnicities. The findings included in this memo should not be construed such that all people of color are believed to share the same opinions. Disaggregated race data will be provided when sample sizes permit reliability.

This research was completed as a community service by the Oregon Values and Beliefs Center, an independent and non-partisan organization. OVBC is an Oregon charitable nonprofit corporation (https://.oregonvbc.org).