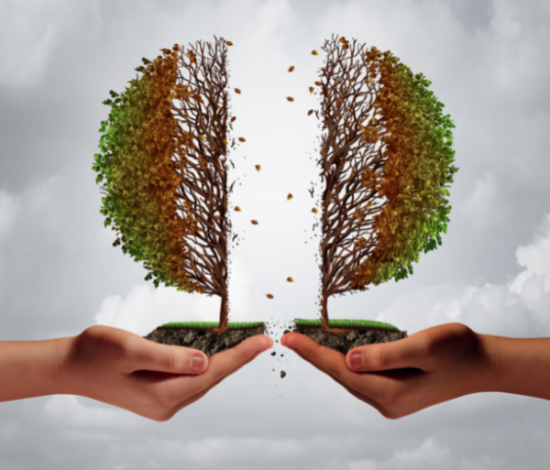 From February 1-7, 2022, the Oregon Values and Beliefs Center conducted a statewide survey of Oregonians’ values and beliefs, including beliefs and attitudes about political divisions in the United States and in Oregon.  The question numbers in this document correspond with the survey questionnaire (Q9-11, Q13-15, Q27).

Nearly all Oregonians say that our country is politically divided and that the trend is worrisome (Q9, Q10).

Oregonians see political divisions in state politics, too, but to a lesser degree than nationally (74% Oregon to 88% nation) (Q13).

News Source Influence on Perceptions of
“A Divided State”

People who believe Oregon is politically divided are more likely to rely on digital or online news sources, as well as national newspapers, such as the New York Times and the Washington Post (Q27).

Yet Another Source of Political Division:
Whether We Can Work Together to Bridge Divides

About one in five Oregonians believe it is possible to overcome national political division (28%) (Q11).

Oregonians aren’t any more optimistic about healing divisions at home, versus nationally. About one-quarter say it’s possible (27%), while the rest say it is impossible or else they aren’t sure (38% and 35%) (Q15).

In Their Own Words:
What Needs to Happen
to Bridge the Political Divide

When asked what needs to happen to bridge the political divide in the country, Oregonians mention the need to compromise, reduce partisanship, put the greater interest of the country above personal values, and care for those who need it.

“Bipartisanship!  Both parties must have a common goal aside from their personal beliefs and perspectives and understand that the interest and growth of the country should be their first priority!  The people come first”

“Having better compromises between parties on main issues instead of just picking on one side over the other”.

“Those who were responsible for January 6th need to be prosecuted, less gerrymandering so districts can become more competitive (ensuring moderate candidates instead of extremists), guardrails put on social media, and revisiting the Citizen’s United Supreme Court ruling”.

“A review of what we have in common: the desire for the opportunity, and a willingness to care for people who need it”.

“Less extreme policy suggestions from both sides of the aisle and politicians who have the desire to bridge this gap rather than act in self-interest or single-party interest need to be in office”.

“We need to stop fighting with each other about nonsense restrictions put in place by an oppressive government and stand up for each other as a nation.  We formed this nation to escape tyranny, and we are doomed to fall back into it if we cannot correct our course”.

“Politicians need to consider the welfare of the citizens and stop being driven by lobbyists and their personal election goals.  We need to move beyond the two-party system that forces people to choose a side, a label.  The much larger need is for the corporate and global interests to no longer be allowed to buy the politicians and the media”.

“Rural Oregon needs to be heard, but they also need to understand that the policies coming from urban elected officials have a direct impact on their lives: higher wages, paid sick leave, paid family leave, environmental protections.  We are all in this together”.

There is not a meaningful difference between BIPOC and white respondents when it comes to political divisions nationally. Both groups believe division is stark (84% to 89%) (Q9).

Rural residents are more likely to believe the country is politically divided, but they are less likely to express deep worry over these divisions than urban residents (Q10).

Of all Oregonians, people under 30 are the most likely to say our state is not divided politically (26%) (Q13).

Young people tend to be more optimistic that we can move past political divisions in Oregon (Q15).

Methodology: The online survey consisted of 1,584 Oregon residents ages 18+ and took approximately 15 minutes to complete. Respondents were contacted by using professionally maintained online panels. In gathering responses, a variety of quality control measures were employed, including questionnaire pre-testing, validation, and real-time monitoring of responses. To ensure a representative sample, demographic quotas were set, and data weighted by area of the state, gender, age, and education.

Statement of Limitations: Based on a 95% confidence interval, this survey’s margin of error, for the full sample, ranges from ±1.5% to ±2.5%. Due to rounding, numbers may not add up to 100%.