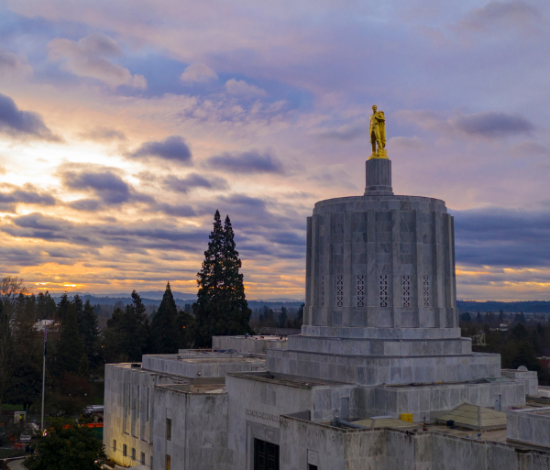 From January 13-20, 2022, the Oregon Values and Beliefs Center conducted a statewide survey of Oregonians’ values and beliefs, including three questions about Oregon’s political leadership. We’d like to acknowledge and thank DHM Research for providing us baseline questions benchmarked to determine changes in attitudes over time.  The question numbers in this document correspond with the survey questionnaire (Q15-17).

Do Oregonians Believe Progress Can Be Made During the 2022 Legislative Session?

Oregonians are not overly optimistic that the legislature and Governor will be able to make significant progress on the key issues facing Oregon during the 2022 Oregon Legislative session. Two-thirds of Oregonians (63%) say they are not very/not at all optimistic and one-third (31%) very/somewhat optimistic (Q15).

This is a sharp decline in optimism from 10 years ago, when a statewide survey of Oregonians found that 55% were very/somewhat optimistic that the legislature and Governor would be able to make significant progress, compared to 41% who were not[1].

In Their Own Words: Why Are Oregonians Optimistic or Pessimistic About the 2022 Legislative Session?

Oregonians were provided the opportunity to respond in their own words as to why they feel optimistic or not about the prospects of the legislature and the Governor making progress during the 2022 Oregon Legislative session. Below is a representative sample of quotes from respondents not feeling optimistic, with the key themes being concern over lack of compromise, political polarization, and a feeling that politicians are out of touch with everyday Oregonians (Q15a).

“Oregon doesn’t seem to focus on issues that everyday people are worried about.”

“Partisanship and winning elections will be the key driver of what happens in the 2022 session.”

“A vocal minority brings things to a complete halt when they don’t get their way. How could we feel optimistic.”

“There will never be any hope for good results from the government so long as we have a first-past-the-post voting system. It will always be dominated by the two major parties, both of which are irredeemably corrupt.”

“I’m hopeful they can, but I’m sure Republicans will pull more “we’re just going to run away rather than actually try to negotiate” stunts, which will kill some progress.”

“The Oregon state has shown their willingness to take up issues that are only important to the most liberal progressive minority of the population while acting as though they care about the health and happiness of the ordinary working class who don’t have pronouns and aren’t protesting for social justice.”

“The only difference is everyone will be grandstanding, hoping to make points with their base of voters. I expect more of what we’ve seen in the last few sessions. Some work will get done, mostly along party lines, but I’m not sure any of the “big issues” will be dealt with.”

“Too much party politics without regard for what the PEOPLE in this state want or need.”

“Win at all costs politics determines all, especially in an election year.”

“There is enough money in this country that most problems could be solved IF we agree on the problems and IF we agreed on who’s responsible and what the role of government is at different levels, and IF we had responsible leaders who could move us forward.”

What Do Oregonians Want From Their Political Leaders: Compromise or Sticking To Their Beliefs?

The Qualities Oregonians Want In Their Governor

Oregonians were asked to choose the most important quality for Oregon’s governor to possess (Q17). From a provided list, the highest-rated qualities are:

When asked in January 2019, Oregonians also chose caring and honesty as their top qualities for Oregon’s governor, but the popularity of these qualities was reversed. 47% of Oregonians said honesty was the most important quality, and 24% said caring about average Oregonians.  The difference may be explained by 2019 asking about caring for “Americans” rather than “Oregonians.”