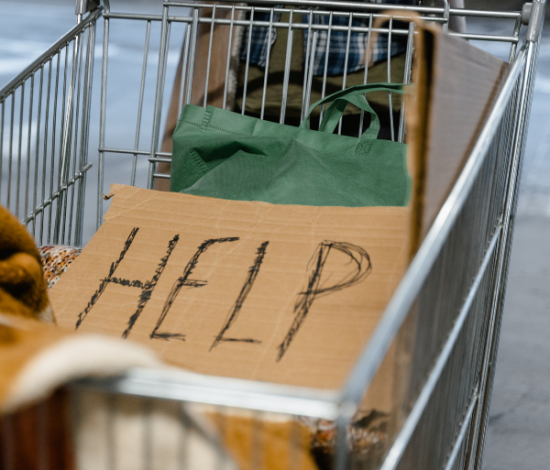 From September 13-21, 2022, the Oregon Values and Beliefs Center conducted a statewide survey of Oregonians’ values and beliefs, including beliefs and attitudes about homelessness in Oregon. A description of the methodology used for the research is provided below.

The question numbers in this document correspond with the survey questionnaire (Q3,Q18-23). Due to rounding, the percentages reported below may not add to 100% or compare exactly to the percentages for the same question in the annotated questionnaire or tabs. Subgroup variations between BIPOC and white Oregonians; rural and urban residents; and between age groups have been of particular interest to individuals and organizations and are provided in the Demographic Trends section below.

Homelessness is THE Top Concern for Oregonians

Homelessness is the issue Oregonians say is most important for leaders to address, by a wide margin (37%) (Q3).

The issue of homelessness has been a top concern for Oregonians for a while. In an April 2022[1] survey, 35% said homelessness needed to be addressed.

“Homelessness and out of control high rents which create more homeless.”

“There is a serious gap between the rich and the poor, and many people have no income or even are homeless. Increase equity, increase homeless temporary shelters.”

“House the homeless and make healthy, clean and sustainably grown food available to all.”

“They need to fix the homeless problem its out of control and they keep doing nothing but making it worse.”

“I would like the homeless problem to be either helped or resolved.”

Leading Causes of Homelessness According to Oregonians

In a November 2021 survey, Oregonians ranked mental illness (61%), substance abuse (58%), and lack of affordable housing (54%) as the leading causes of homelessness. These three factors are also among the most popular priorities that Oregonians want elected officials to address. Housing affordability is mentioned by 15% of Oregonians, making it the second most popular issue, while 8% mention addiction and substance abuse and 4% mention mental health as top priorities for elected leaders.

“I think the majority of issues could be summed up with income inequality. The lack/cost of housing is at the core of the homeless crisis. The lack of mental healthcare and addiction resources fueling the increasing crime. People are desperate and desperate people do desperate things.”

Nearly six in ten Oregonians call for local officials to allocate more money to reduce homelessness (57%) (Q18). Beyond that, 18% say the right amount has been allocated, 13% that less should be allocated, and 12% that they don’t know.

“Definitely need more funding for the homeless to help get them off the streets. That would help businesses and it would help so many more things.”

“Homeless issues should be up to individual cities right tackle. If a city wants to increase their taxes to fund shelters, let that city do it but it shouldn’t be a state-controlled thing. Taxes never disappear.”

“Homelessness is a growing issue. As joblessness and inflation rise, more become homeless. It has been shown that with a hand up, a high percentage of people can get back to taking care of themselves. Others need mental health help. There will always be ones that won’t take the help and are willing to stay as they are.”

“I believe that the funds that were earmarked for the homeless issue has been squandered, wasted or put in someone’s personal bank account.”

“It is not only about funding but also utilizing the funding effectively. Houselessness is a systemic issue and funding is just a part of it. There needs to be a holistic solution to it with intervention and mental health support for people.”

“More money is not the answer. Organized, thoughtful, logical actions are needed. We do not have enough leadership in place that can do this.”

“Throwing money at the homeless issue hasn’t had reduced the problem. It’s created a whole industry supported by state funds that does little to actually improve the lives of the people it purports to serve.”

“The resources are there they just need to implement a plan of action to get people off the street and into homes. I still find it incredible that while the country is sending billions of dollars of aid to the Ukrainian conflict while its own citizens are living in tents or cars!”

Seven in ten residents (71%) agree that Oregon should guarantee temporary housing or shelter: 42% strongly agree and 30% somewhat agree (Q19). About one in four disagree (23%)

“People should not sleep on the street. Give people jobs to do or send them to job training. Everyone needs to contribute something to our community.”

“Everyone deserves a safe place to sleep every night.”

“They should focus on zoning changes that allow development of more multi-unit housing and provide enough designated shelter space to enable removal of homeless camps on other public land elsewhere.”

“A lot of homeless people are not there by choice and they deserve to be helped and treated like humans.”

“We need to be building safe centers for homeless and staff them to ensure their overall safety.”

“When the settlers came to Oregon, they were ‘homeless’ living in tents and covered wagons. It should not be a crime to sleep in your vehicle.”

Support for Oregon guaranteeing permanent housing or shelter is also strong, with 64% agreeing that access to permanent shelter or housing should be guaranteed as a basic human right for all residents (34% strongly, 30% somewhat) (Q20). Disagreement is slightly higher (29%) compared to disagreement for temporary housing (23%) (Q20,Q19).

“It seems to me that it’s less about getting people off of the street (some of whom want to be there) and more about increasing affordable housing. There are a lot of working people who are homeless, because they can’t afford to live where they work.”

“Jesus Christ, do something about the housing crisis. Where are my tax dollars going?”

“Housing first programs are proven to be most effective to help the homeless, but the housing isn’t available in Portland or other areas. That is what needs to be addressed.”

“I don’t think we’ve built any low-income housing or even affordable housing in 20 years. Everyone grumbles—I see a lot of hate against the homeless—and yet there is little to no action by government, only by individual volunteer groups. Why have government if they consistently turn a blind eye?”

“It’s been shown to be cheaper to simply get people who are homeless a decent place to stay than to fund all the programs that clearly seem not to be working.”

“Stop allowing LLCs, Corporations, and REITs to buy houses. Regulate housing ownership like the public utility they are.”

“Homeless people have rights and should get housing. Vacation rentals and secondary homes should be taxed to the extreme. You don’t have to have a vacation home!”

“Large homeless populations exist for no other reason than an imbalance between affordability and profitability. A well-regulated market must exist to favor solutions and not profitability.”

“Metropolitan cities around the country have made tiny house/apartment communities that are more affordable. It would be amazing if we could also implement similar housing ideas in southern Oregon.”

“Housing first programs have shown to use less resources and funding than not having them in place. There is less cost because we aren’t having to pay the police to handle homelessness on the streets. It’s well proven that shelter is the first human need, having programs that require being clean from drugs or having a job to have shelter do not work as well because shelter is the first basic need.”

Does The Issue of Homelessness Affect Voting Behavior?

Oregonians are split between saying the issue of homelessness makes them more likely to vote in November (46%) and that it does not affect their voting behavior (45%) (Q21). Few residents say it makes them less likely to vote (3%) or that they are unsure (6%).

Democrats (54%) are more likely to say homelessness will encourage them to vote than Republicans (40%) and other Oregonians (43%).

Renters (51%) are more likely to be motivated to vote by the issue of homelessness than homeowners are (42%).

“Homelessness is a hot topic and should be addressed immediately. However, I don’t think one idea or person is going to have all the answers. It shouldn’t be a political issue.”

“The fact we have so many homeless people in Oregon and the country is a sign this country is collapsing. Our government is being led by people out of touch with reality– we need younger and less wealthy politicians.”

No Clear Consensus When it Comes to Prioritizing Clearing Encampments vs. Providing Services

“Clearings do nothing but move them elsewhere. The issue isn’t being addressed.”

“Homeless people need help. Oregon should be the state to find a solution that works to help prevent people from becoming homeless and help those that are homeless find a path back to being able to support themselves.”

“Homelessness is a serious problem in Portland, where I recently lived. It is simply unacceptable to allow the once vibrant downtown of Portland to be overrun with homeless camps. I know we can’t just ship the homeless somewhere else, but we do need some concerted action to provide the services and residence opportunities to get people off the street so that downtown becomes attractive again.”

“People need affordable housing, but they also need access to mental health/drug addiction services to help get them off the street.”

“It remains one of the biggest scandals of one of the richest nations on earth to see the level of homelessness in Oregon. Allot the damn money already, build tiny houses, convert motels, build affordable housing, increase mental health services, remove the police as first contact with mentally ill people on the streets.”

“Homelessness is hugely impacting my area in rural Oregon and people are super torn on it here. Some people want to do all they can to help the homeless and some people don’t believe in giving handouts of any sort and believe we should starve them out. I honestly feel that inadequate mental health services are driving homelessness and if we focused more on mental health, we’d solve a lot of the homelessness issue.”

“Clearing homeless camps is invasion of personal property which in history has cost many people their lives by being rebuked by the person whose space is being invaded. I would personally support the person defending their ground (especially in times where affordable housing isn’t available, there aren’t other places to go) in a jury trial.”

Statement of Limitations: Based on a 95% confidence interval, this survey’s margin of error for the full sample ±2.26%. Due to rounding or multiple answer questions, response percentages may not add up to 100%.