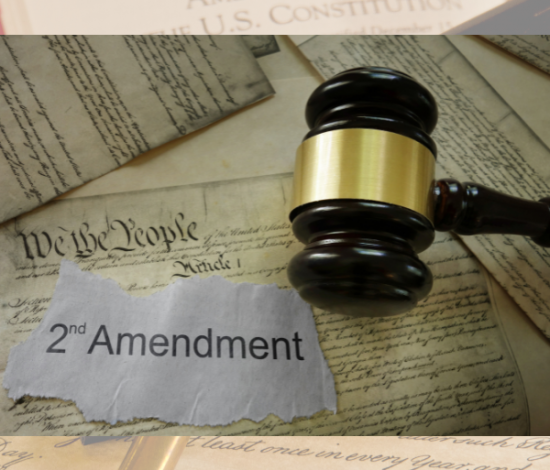 From June 2–11, 2022, the Oregon Values and Beliefs Center conducted a statewide survey of Oregonians’ values and beliefs, including their views on gun regulations. The question numbers in this document correspond with the survey questionnaire (Q18–21).

A majority of Oregonians believe that gun regulations in this country (59%), as well as in the state of Oregon (56%), should be more strict than they are today (Q18, Q21).

This mirrors national trends. According to a Pew survey conducted in April 2021[1], 60% of Americans want stricter national gun laws.

Oregonians with household incomes of $100,000 per year or more, urbanites, women, college graduates, and those 75 or older are the most likely to want more strict laws in the United States (67% to 76%) (Q18). To a slightly lesser degree, these groups are also the strongest supporters of stricter gun laws in Oregon (63%-72%) (Q21).

Slightly more than half of Oregonians believe that making it harder for people to obtain firearms would result in fewer mass shootings (54%) (Q19).

This is slightly higher than a national poll conducted by Pew in April of 20211, in which 49% of Americans said making it more difficult to obtain firearms would reduce the frequency of mass shootings.

57% of Oregonians say they do not own a gun, not including recreational versions like air guns, paintball, BB or pellet guns (Q20).

About one in three people (32%) say they own a firearm, along with 10% who would prefer not to answer this question. Oregonians’ rates of gun ownership align with national trends, according to a June, 2021 Pew Research Center Poll[2], in which 30% of Americans said they own a firearm.

Is Gun Ownership Predictive of Opinion on Regulations?

Owning a firearm does not always predict a preference for lax gun regulations.

“I think a lot of average gun owners would support stricter laws and checks for ownership and removal of guns with fast, multiple rounds such as rapid military grade rifles. I think many gun owners are NOT aligned with the NRA.”

“As a gun owner, I felt it was way too easy to purchase a firearm in Oregon. I would happily support waiting periods, restrictions on firearm types, and strict red flag laws.”

Women are more likely than men to want stricter gun laws, and also less likely to own a gun.

In Oregon, women are less likely than men to own a gun (25% compared to 41%) (Q20). Gender differences in gun ownership in Oregon are very similar to those at the national level. The aforementioned June, 2021 national poll by Pew Research found that 22% of women and 39% of men own a firearm.

Perhaps unsurprisingly, the issue of gun control is polarizing across demographics. The starkest contrast in responses falls along political lines. 90% of respondents who identify as Democrats believe federal gun laws should be stricter, while only 24% of those who identify as Republicans feel the same (Q18).

Practical uses and recreational opportunities involving firearms are much more abundant in rural areas, so it comes as no surprise that Oregonians who live in rural parts of the state are more likely to own a firearm than those living in urban areas (41% to 24%) (Q20).

Rural residents of Oregon are nearly evenly split as to whether making gun access more difficult would reduce the number of mass shootings (39%) or would not make a difference (43%) (Q19).

By contrast, 65% of residents of urban areas believe making gun access more difficult would result in fewer mass shootings, and 24% believe more difficult access would not make a difference.

Despite being less likely to say increasing the difficulty of access to guns would reduce mass shootings, most rural residents agree with their counter parts living in other parts of Oregon that state and national gun laws should be more strict.

Views on state gun laws follow a similar trend. Rural residents are more likely than urban residents to say gun laws are about right (25% to 16%) or should be less strict (23% to 12%), but most still agree with the majority of Oregonians that state gun laws should be more strict (42%).

Oregonians 18-29 years of age fall on the higher side of support for tighter gun control for both federal and state level restrictions (63%, 59%).

Only 19% of Oregonians aged 18-29 own a gun, compared to 31%-43% of all other age groups. This could be partially due to the high cost of guns, although younger Oregonians tend to lean towards support for tighter gun regulations.

18-29 year-olds are more likely than any other age group to say making it harder to legally obtain guns would result in fewer mass shootings (61% compared to 49-59%) (Q19).

Oregonians aged 30 and older are significantly more likely than 18-29 year-olds to say limiting access to firearms would make no difference in the number of mass shootings (32%-37% to 22%).

When it comes to gun regulations at the state level, 50% of BIPOC Oregonians and 59% of white Oregonians support more restrictions, although BIPOC Oregonians are twice as likely to say they don’t know whether state gun laws should be more or less strict (12% to 6%) (Q21).

Methodology: The online survey consisted of 1,446 Oregon residents ages 18+ and took approximately 15 minutes to complete. Respondents were contacted by using professionally maintained online panels. In gathering responses, a variety of quality control measures were employed, including questionnaire pre-testing, validation, and real-time monitoring of responses. To ensure a representative sample, demographic quotas were set, and data weighted by area of the state, gender, age, and education.

Statement of Limitations: Based on a 95% confidence interval, this survey’s margin of error for the full sample ±2.5%. Due to rounding or multiple answer questions, response percentages may not add up to 100%.