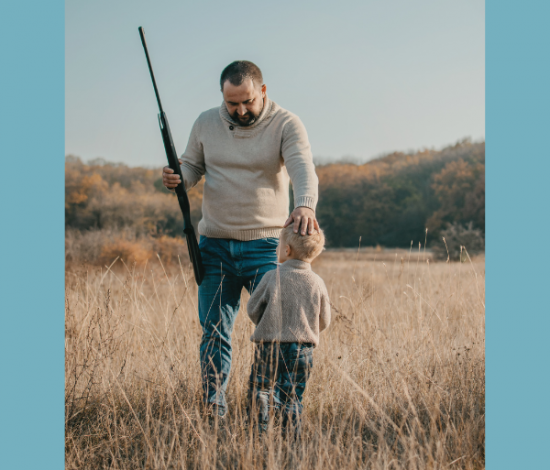 From July 8–16, 2022, the Oregon Values and Beliefs Center conducted a statewide survey to determine Oregonians’ thoughts on guns and gun control. The question numbers in this document correspond with the survey questionnaire (Q36–43, and Q9).

Four in five Oregonians feel there should be some level of gun control (83%). There is strong agreement on this among Oregonians and no demographic category drops below 66% (Q40).

Oregon women are united in wanting at least some level gun control in Oregon (88%, compared to 79% of men).

Those with a college degree or more are more likely than Oregonians with a high school education or less to be in favor of some gun control (91% vs. 75%).

Should Gun Laws be More or Less Strict?

The majority of Oregonians think gun laws in Oregon should be more strict than they are today (56%) (Q36).

Support for stricter laws is highest among those who live in the Tri-County area, with 64% wanting more strict gun laws compared to 52% and 47% of those living in the Willamette Valley or the rest of the state. Oregon women show stronger support for stricter gun laws compared to men (62%, 49%). Oregonians with a four-year college degree are more likely than those with less formal education to support stricter gun laws (72% vs. 42-54%).

A lack of trust in the Supreme Court of the United States goes hand-in-hand with a desire for more strict gun laws in Oregon.

Residents with little to no trust in the Supreme Court are more likely to support stricter gun laws compared to those who have a great deal or fair amount of confidence in the SCOTUS (69% vs. 30%).

“Stricter laws should of been in place years ago.”

“Guns meant for war should not be sold period. Criminals will always find a way to get a gun if they want one. We are the only country where these things happen on a regular basis.”

“Guns are a tremendous problem in this country and I am fine with the 2nd amendment right to own a gun, as I do. Politicians are too indebted to the gun industry and the NRA, it is always about money and political backing.”

“Additional gun laws will do little to stem the disease of gun violence in our nation. People’s hearts must change for their behavior to change. The breakdown is really due to the breakdown in the family, our schools and our focus on our individual and not corporate values.”

“In order for people to understand gun laws and gun protocols you need to learn first what your state already has in place and then learn why those laws are or aren’t enforced. There’s no point adding more if they get thrown out of court. Also, the 21 age requirement should be for civilians not military personnel.”

“Laws are only as good as enforcement, so if have stricter gun laws but don’t enforce those laws, it’s a waste of time!”

22% of Oregonians think gun laws are about right in Oregon, while in April of 20211, 32% of Americans thought gun laws in the United States were about right.

A strong majority of Oregonians support background checks for all gun purchases (88%); preventing the sale of firearms to those with certain mental health conditions (88%); expanding screening and treatment for people with mental illness diagnoses (88%); and raising the minimum purchase eligibility age to 21 (81%) as policies related to gun access (Q37A-E).

When asked an open-ended question about what types of gun control they would support, Oregonians express support for policies like barring those with a history of domestic abuse from owning firearms, establishing gun licenses that require gun-use training, and limiting magazine sizes (Q41).

“I think common sense gun control that is widely favored by the public and is in place in other countries is perfectly fine, such as strict permit and license requirements, background checks, regulation of ammunition sales, etc. People who have histories of domestic abuse should be barred from firearm ownership as this is one of the greatest predictors of gun violence.

“Treating a gun like a car: tags insurance license and renewals plus outlawing automatic guns and the means to make guns automatic outside of the military (not even police).”

“A Gun control that works on a local, state and federal level to prevent the sale of firearms to anyone who has a highly dangerous and illegal back ground with weapons or history of violence against another person or has been involved in assaults or violent person to person crimes.”

“We’re spiraling downward with all the gun crimes going on now. It’s time to grow up and honor the full text of the constitution and enforce strict regulations.”

“Ban on assault weapons, restriction on magazine size, must be 21, background check on all forms of sales, red flag laws.”

“Banning assault rifles, background checks, preventing gun sales to those with documented mental illnesses and have been deemed dangerous by medical professionals.”

“Treat it the same as a driver’s license, require proof of training/proficiency before handling and allow permission to be removed if enough rules are violated.”

“Age at 21, except for hunting rifle, with classes and passing certification, a ban of assault/military style automatic weapons, a limit on the large amounts of ammunition, background checks for any person that is purchasing a gun or is being given a gun.”

“No civilian would have a military style gun in their possession. I see no reason for civil law enforcement to have automatic weapons that are made to kill large numbers of people. All guns should be registered with local law enforcement stating the purpose for which they will be needed and possibly used.”

Do Oregonians Want to Vote for a Candidate In Favor of Gun Control?

Identifying what unites us. Understanding what divides us.