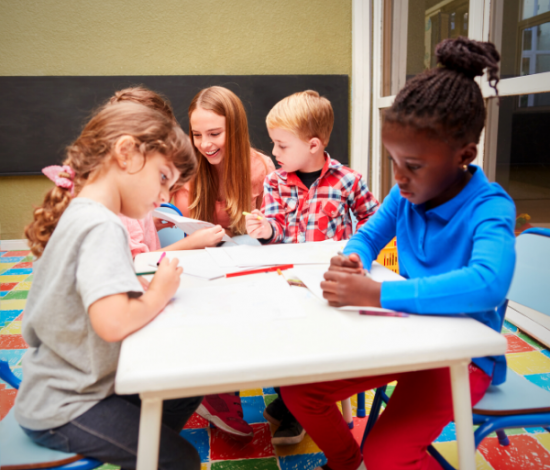 From March 16-23, 2022, the Oregon Values and Beliefs Center conducted a statewide survey of Oregonians’ values and beliefs about services and policies that are commonly recommended for supporting Oregon children. The question numbers in this document correspond with the survey questionnaire (Q1–5, Q7, Q8, Q21, Q22).

Investment in Learning Opportunities: What do Oregonians View as Important?

In providing a response of “very” or “somewhat important,” respondents agreed that these services were worthy of additional funding, whether by new revenue or cuts elsewhere in the budget.

Oregonians strongly believe there is value in investing in early learning opportunities for children with special needs or disabilities (Q5).

While these programs and services are popular among Oregonians, fewer than half of residents say they are very important (39%, 40%), making them second-tier priorities.

Oregonians with school-aged children at home are significantly more likely than residents without to say that parental education is somewhat or very important (73% to 66%) (Q3). This is the only significant difference between these groups when it comes to the four programs and services considered.

Making childcare more affordable for families is of similar import to Oregonians, who believe this would help children get a strong start in life (Q2).

More than half of Oregonians say they strongly support additional funding for childcare to get kids started off on the right foot (56%). And, in total, about eight in ten Oregonians say this is somewhat or very important (79%).

Differences by Gender and by Income

Women are five to eight percentage points more likely than men to say that each program or service tested is important and thus deserving of more taxpayer funding.

The contrast between the responses of women and men is stark. While 63% of women say that providing early education to kids with disabilities is very important, 49% of men agree.

Oregonians with household incomes of $50,000 per year or less are typically the most likely income bracket to support additional funding for these early childhood programs and policies, by a margin of five to 12 percentage points.

There was one exception: high-quality early learning programs for infants and toddlers to start developing school-ready knowledge and social skills. For this policy, 65–70% of residents in each income group supported investment, representing no statistically significant difference.

Oregonians with incomes of less than $50,000 per year are significantly more likely to hold positive impressions of both Head Start and OPK.

Although Head Start and OPK are broadly popular among Oregon residents, about one-quarter of social conservatives have a negative impression of these early education programs (23%, 28%) (Q7, Q8).

A strong majority of Oregonians—with and without children—agree that finding affordable, high-quality childcare is difficult in the state. Just 7% of residents say it is somewhat easy to secure good childcare that is affordable (Q21).

About three-quarters of Oregonians say it is somewhat or very difficult to find affordable, quality childcare (72%). Among these residents are 40% who describe it as very difficult.

Oregonians believe it is somewhat easier to find after-school programs and activities for school-aged children, although six in ten say this, too, is difficult (60%) (Q22).

Economic conservatives and young adults are more likely to believe it can be fairly easy to find affordable childcare or after-school programs (Q21, Q22).

Economic conservatives are more likely to describe finding affordable childcare as somewhat easy (12%, compared to 4% and 7% for liberals and moderates) (Q21).

When it comes to after-school programs, one-quarter of economic conservatives say they are somewhat easy to find (25%, compared to 16% and 19% for liberals and moderates) (Q22).

When asked to prioritize an age group for the distribution of taxpayer dollars, 9% or Oregonians rate early education, from birth to age 5, as most important. Only 4-year colleges and universities are rated “most important” by fewer Oregonians (8%), with K-12 receiving the most support (56%, combined) (Q1).

Respondents were given the opportunity to comment about the most important levels of education. Many express difficulty choosing one age group over another. Those that specifically address early education often mention the role of early learning and development in future success:

“Early development programs are so necessary to lay a good foundation of positive neural pathways. They also tend to connect community supports to families who need them the most. Kids who enter kindergarten without trauma are better learners for the rest of their education.”

“All of the levels are important. But, if children don’t have proper nutrition, start learning preschool skills, it sets them up for struggle all of the way through.”

“All of the levels are important. But, if children don’t have proper nutrition, start learning preschool skills, it sets them up for struggle all of the way through.”

“Seems to me it’s more important for children to have a solid foundation.”

“Frankly, I think it all matters. But infant and toddler care needs to be free. Fully free. Right now, people who can’t afford childcare are screwed. You can’t get a job without childcare and you can’t get childcare without the money from said job. Too poor for childcare means you are literally too poor to work. Bring back the free childcare of the 1940’s. We did it once. We can do it again.”

“Early childhood development is crucial for the success of children at school and in life.”

“What happens in pre-K is MOST important, and I think of those years as les education and more in terms of overall welfare: healthcare, nutrition, family security and stability, etc.”

“Identifying what unites us and understanding what divides us.”

Oregonians under the age of 45 are more likely than their older peers to say that early childhood policies deserve more taxpayer funding (Q2–5).

Oregonians under 30 are more likely to believe that finding affordable, high-quality programs can be easy (Q21-22).

Methodology: The online survey consisted of 1,563 Oregon residents ages 18+ and took approximately 15 minutes to complete. Respondents were contacted by using professionally maintained online panels. In gathering responses, a variety of quality control measures were employed, including questionnaire pre-testing, validation, and real-time monitoring of responses. To ensure a representative sample, demographic quotas were set, and data weighted by area of the state, gender, age, and education.
Statement of Limitations: Based on a 95% confidence interval, this survey’s margin of error, for the full sample, ranges from ±1.1% to ±1.9%. Due to rounding, numbers may not add up to 100%.

Analysis and Reporting by: Anne Buzzini