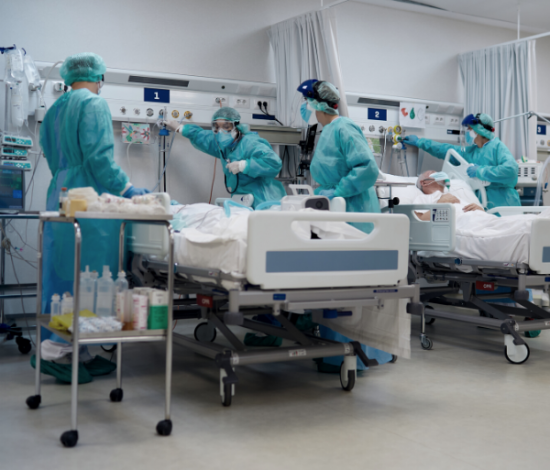 From October 8-18, 2021, the Oregon Values and Beliefs Center conducted a statewide survey of Oregonians’ values and beliefs, including beliefs and attitudes toward COVID-19 and the health care system. The questions were intended to gather preliminary data to inform more in-depth research in the months ahead.

The online survey consisted of 1,403 Oregon residents ages 18+ and took approximately 15 minutes to complete. Demographic quotas and statistical weighting were used to ensure a representative sample. Based on a 95% confidence interval, this survey’s margin of error, for the full sample, ranges from ±1.6% to ±2.6%. Due to rounding, numbers may not add up to 100%.

The question numbers in this document correspond with the survey questionnaire and tabs, which can be downloaded at the bottom of this page (Q23-Q27).

Concerns About Beds, Staffing, and Supplies

Respondents were asked how concerned they are about hospitals serving their area of Oregon having enough beds, staff, and medical supplies.

Oregonians have somewhat less concern about beds and medical supplies.  Regarding beds, 78% of Oregonians are either very (48%) or somewhat (30%) concerned about their hospitals not having enough beds for patients requiring hospital care, compared to 19% of Oregonians who are either not at all or not very concerned (Q23).

Many Oregonians think COVID-19 will have a negative long-term effect on the pool of healthcare workers available to adequately staff hospitals serving their area of Oregon. 43% of Oregonians strongly agree with this statement, 35% somewhat agree, 8% somewhat disagree, and only 5% strongly disagree (Q26).

Prioritizing Care: COVID vs. Other Serious and Life-Threatening Illnesses

Oregonians feel patients with COVID-19 should not be given priority over patients with other serious and life-threatening medical conditions now that vaccinations against COVID-19 are widely available and FDA approved. 30% strongly agree with this statement 34% somewhat agree, 15% somewhat disagree, and 9% strongly disagree. Notably, 12% of Oregonians responded that they don’t know (Q27).