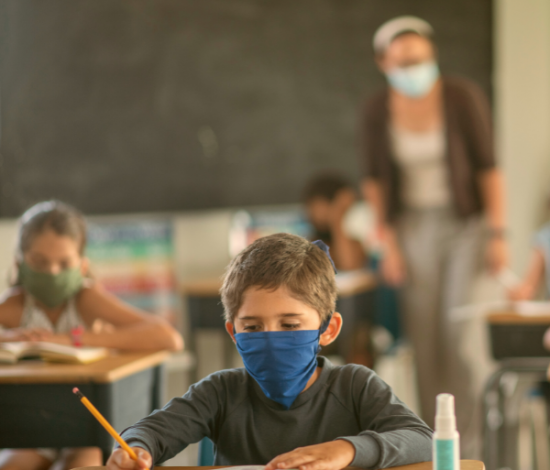 From October 8-18, 2021, the Oregon Values and Beliefs Center conducted a statewide survey of Oregonians’ values and beliefs, including on the impact of COVID-19 on our community. The questions were intended to gather preliminary data to inform more in-depth research in the months ahead.

The online survey consisted of 1,403 Oregon residents ages 18+ and took approximately 15 minutes to complete. Demographic quotas and statistical weighting were used to ensure a representative sample. Based on a 95% confidence interval, this survey’s margin of error, for the full sample, ranges from ±1.6% to ±2.6% depending on how the response category percentages split for any given question. Due to rounding, numbers may not add up to 100%.

The question numbers in this document correspond with the survey questionnaire and tabs which can be downloaded at the bottom of this page (Q1-21).

Roughly six in ten Oregonians (57%) support vaccine mandates for children ages 12 years and older, while 33% are opposed and 11% are unsure.

Masks in schools appear to have strong overall support, with a majority of Oregonians saying masks do not jeopardize any of the following, or, if they do, should be mandated regardless:

Eight in ten Oregonians (79%) would support increasing state funding for local school districts to support programs to help students who have fallen behind because of COVID-19, compared to 12% in opposition. A majority of all age, gender, education, income, geographic, ethnic, and political groups support such a proposal (Q4).

Fewer than four in ten (36%) say they would support paying more in taxes to allow schools to add more bus routes with fewer students per bus, while 48% are opposed and 16% are unsure. Support decreases with age, from 42% among those aged 18-29 to 23% among those ages 75 and older (Q12).

More than six in ten (63%) say they would support paying more in taxes to allow schools to upgrade facilities to increase health and safety like HVAC systems, covered outdoor areas for eating and recreation, with 27% in opposition and 9% unsure. Safety upgrades like these tend to get high support from survey respondents and are supported here by more than 60% of both parents and non-parents alike (Q13).

Concern About Spread Among Students

Oregonians are also split on their concern about students and/or their child(ren) contracting COVID-19 from a teacher or staff member, with 46% saying they are unconcerned and 42% saying they are concerned. Women show higher concern than men (45% vs. 38%) (Q15).

Nearly six in ten (56%) say they are concerned about students and/or their child(ren) contracting COVID-19 from another student, while 34% are unconcerned and 10% are unsure. Again, the concern is higher among women than men (61% vs. 49%). It will be interesting to track results for this question over time as more children get vaccinated (Q16).

More than six in ten (64%) say they are very or somewhat concerned about children passing COVID-19 to another family member. Three in ten (31%) are not at all or not very concerned. Again, women are more concerned than men (69% vs. 59%), a clear trend in this survey (Q17).

Additionally, nearly seven in ten (67%) are very or somewhat concerned about children becoming seriously ill and/or hospitalized from COVID-19. Again, women are more concerned than men (72% vs. 61%).