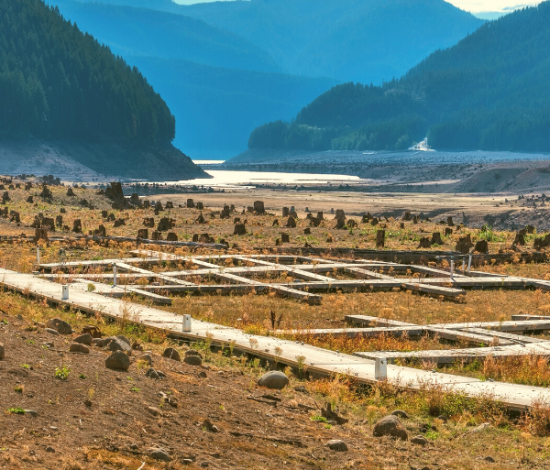 From August 9-17, 2021, the Oregon Values and Beliefs Center conducted a statewide survey of Oregonians’ perceptions of climate change. The questions were intended to gather preliminary data to inform more in-depth research in the months ahead.

This survey uses aggregated data to analyze the opinions of BIPOC residents in comparison to the opinions of residents who identify as white and not another race. BIPOC residents are not a monolith; the grouping represents a wide diversity of races and ethnicities. The findings included in this memo should not be construed such that all people of color are believed to share the same opinions. Disaggregated race data will be provided when sample sizes permit reliability. The question numbers in this document correspond with the survey questionnaire, available for download at the bottom of the page (Q35-41, 44-45, 47-74, 85).

Can We Solve Major Issues Before It’s Too Late?

Two-thirds of Oregonians think there is a small or no chance that humans can solve climate change soon enough (66%) (Q35-41).

Which Impacts Do Oregonians Attribute to Climate Change?

About six in ten or more Oregonians say weather events, like hurricanes and flooding, and environmental events, like forest fires, crop failures, and timber die off, are attributable to climate change (62-76%) (47-55).

On a similar note, Oregonians are much more likely to blame hotter, drier weather than forest practices for increased wildfires (54% to 23%) (Q44).

Oregonians and Physical or Emotional Impacts of Climate Change

More than one-third of Oregonians say the impacts of climate change have resulted in significant or dramatic physical or emotional impacts (38%). Another 40% have experienced slight impacts (Q85).

Six in ten Oregonians say governments and residents need to work together to mitigate the impacts of climate change (60%) (Q56).

When it comes to individual actions, three-quarters of Oregonians say we should significantly reduce fossil fuel use, driving, water use, consumption of goods, and air travel by 25% or more as a matter of personal responsibility (75-83%) (Q57-65).

Although most Oregonians say we should take individual actions to reduce our fossil fuel use, far fewer support a tax on fossil fuels of more than 25 cents per gallon. A scant majority (51%) say that they would be willing to pay between 25 and 50 cents more per gallon at the pump (Q74).

Protecting the Environment or Economic Growth?

More than seven in ten Oregonians now say protection of the environment should be given priority over economic growth (77%) (Q45).

There are few differences in opinion about humans’ ability to solve increasing rates of homelessness. However, urban dwellers are slightly more optimistic than people living in suburban or rural areas (64-75%) (Q40).

In rural areas, one in five residents say that hotter, longer summers are either not occurring or are not a product of climate change (21%). For urban areas, this figure stands at 12% (Q52).

People of color are more likely to report significant or dramatic emotional or physical impacts because of climate change, as compared to white residents (47% to 37%).

For many individual actions to reduce climate change, like flying and driving less, there are significant differences between urban and rural residents (Q57-65).

Yet a strong urban-rural divide still exists when it comes to taxing fossil fuels. While 26% of urban residents say they oppose increasing the price of fuel at all to combat climate change, that figure rises to 46% in rural areas (Q74).